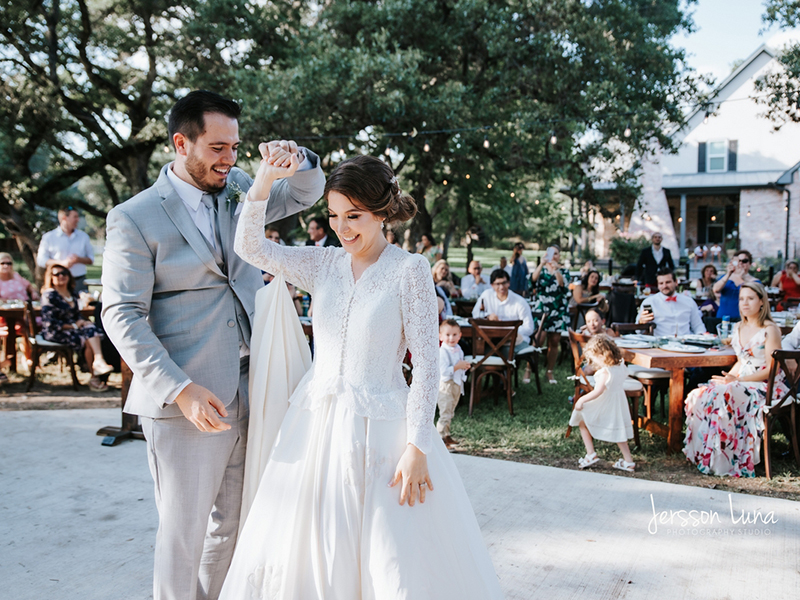 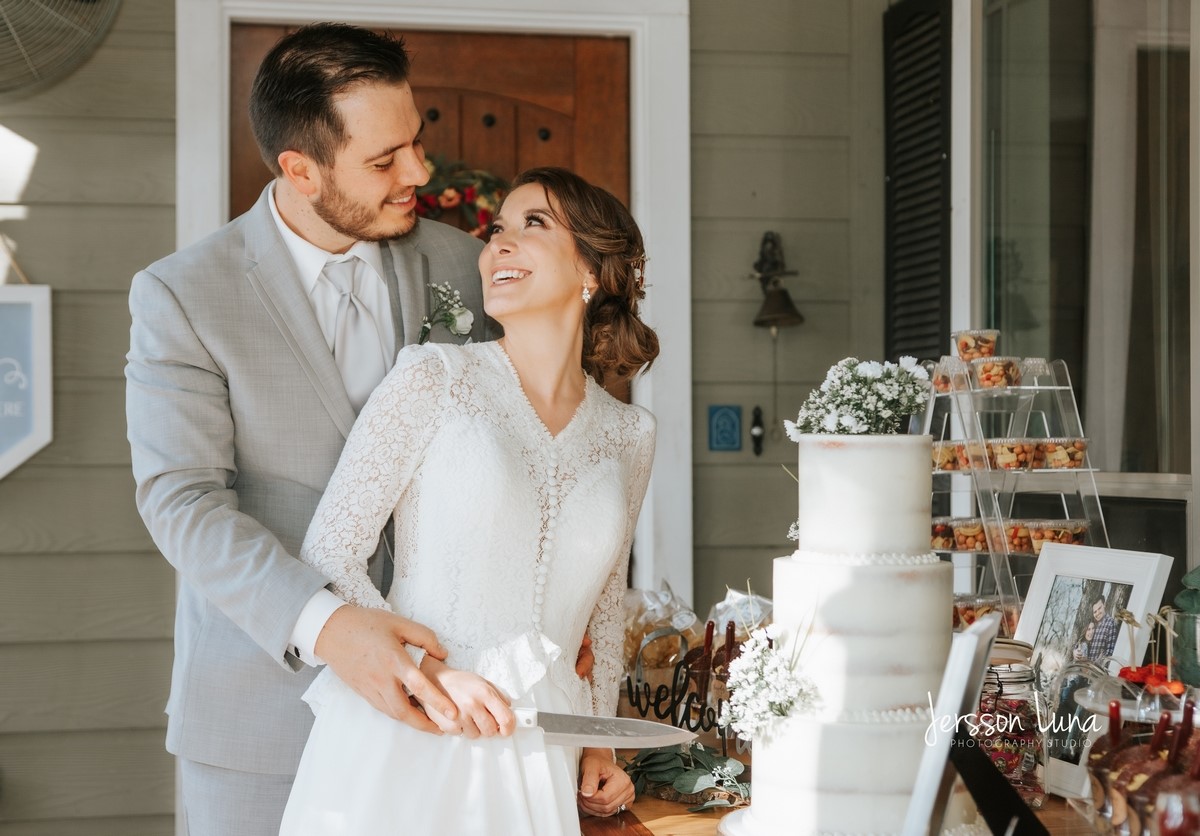 The couple’s parents grew up together in Mexico City. However, Mariana’s family and her moved to the United States when she was 10 years old. Prior, the two had been at a few reunions when they were little kids together but neither one of them remember it. They lost touch and didn’t know of each other’s existence until years later when she was 16 years old and he was 18.

Mariana’s family and her visited Mexico City for a reunion and that is where the couple officially met again.

“I like to say it was love at first sight,” she said. “We talked a lot that day and we exchanged MSN messenger names on a paper plate. The next day, we talked on MSN messenger and we didn’t stop talking until that summer when he came to visit New Braunfels with his family.”

He had just graduated high school, and decided to stay all summer with Mariana’s family. This is where they began dating.

Eventually, Gerardo applied to UTSA and got accepted. They dated for two years until Mariana graduated high school and moved to Miami for a semester. They went their separate ways for more than nine years.

“We both grew up, matured and are thankful for the journeys that we both lived while we were apart,” she said. “We both truly believe that we had to live those separate journeys, meet the people that we met, whom we will forever be grateful to in order to be where we are at now.”

They lost contact for a while but somehow ended up in the same circle of friends. After they had both ended with their past relationships, they realized  the connection they had was worth a second chance. They began dating the Summer of 2018 and we were engaged a year later.

“We are firm believers that we were each other’s destiny and that, ‘What is meant to be will always find a way,'” she said.  “It has been a fun ride and we want to be a testimony of true love to everyone that we meet. We believe we have a beautiful story and we can’t wait to see everything that is in store for us and our future together. We know that when you find absolute happiness and the kind of love that we share then everything fits into place and makes sense.”

When the couple first dated back in 2006, they took a trip to Huatulco Mexico for a wedding.

“It was our first trip together and it was a very meaningful trip because we were dating long distance and we didn’t know what would happen,” she said.

For the proposal, Gerardo surprised her by taking her to Huatulco and proposing at the same hotel where they stayed back in the day.

“He said the time in 2006, we didn’t know if we were going to be together or when we would get to see each other again,” she said. “And now he wanted to make sure we never had to be apart again. It was beautiful. He surprised me with my parents and his parents there as well. It was one of the most beautiful moments of my life.”

As they began planning long distance, they were extremely excited to share their special day with their families. They decided on Queretaro as most of our families live in Mexico and Queretaro is a good half way point for everyone.

They also fell in love with the Hacienda that they found for their venue.

“It was around June of last year when we realized that having our wedding in October would probably not be the best idea since COVID-19 cases kept rising and things were looking very bad,” Mariana said. “We then decided to move it to June, 12 2021. We were able to travel to Queretaro during Spring Break of this year to look at our venue, do our food tasting, and check out details. It was then when we realized that our June, 12 2021 wedding would have to get postponed again due to the limitations that were set at the Hacienda.”

Coronavirus cases in Mexico kept rising and it did not seem likely that a vaccine would be available to everyone by then. They were both extremely disappointed and frustrated as they had been looking forward to finally celebrating their marriage in front of all their friends and families. However, their concern for the health of our loved ones was more important than our feelings of frustration. They knew postponing one more time was the right thing to do. The couple decided to move their wedding to March 12, 2022.

“When talking to a friend about how sad we were about all the changes that we had to make, and having to postpone yet again,” she said. “He told us he could ask Archbishop Gustavo to see if he would be willing to give us a special blessing this summer, so that we could at least be officially married and not have to wait so long. We were both thrilled when Archbishop agreed and thus began our planning for this small ceremony. We were extremely excited and thankful when we found out that many of our family members and closest friends were going to be able to join us for this special ceremony.”

They couldn’t pass up the opportunity of having Archbishop marry them and sharing that special day with their family.

“We were lucky that amid all the frustration and rollercoaster of emotions that came with having to change plans so many times we were able to find great joy in being able to have this special ceremony,” she said. “Our theme was very organic and we kept the vintage look throughout. We got married at my brother and sister in law’s yard, and we knew we wanted to feature the beautiful trees that they have.” 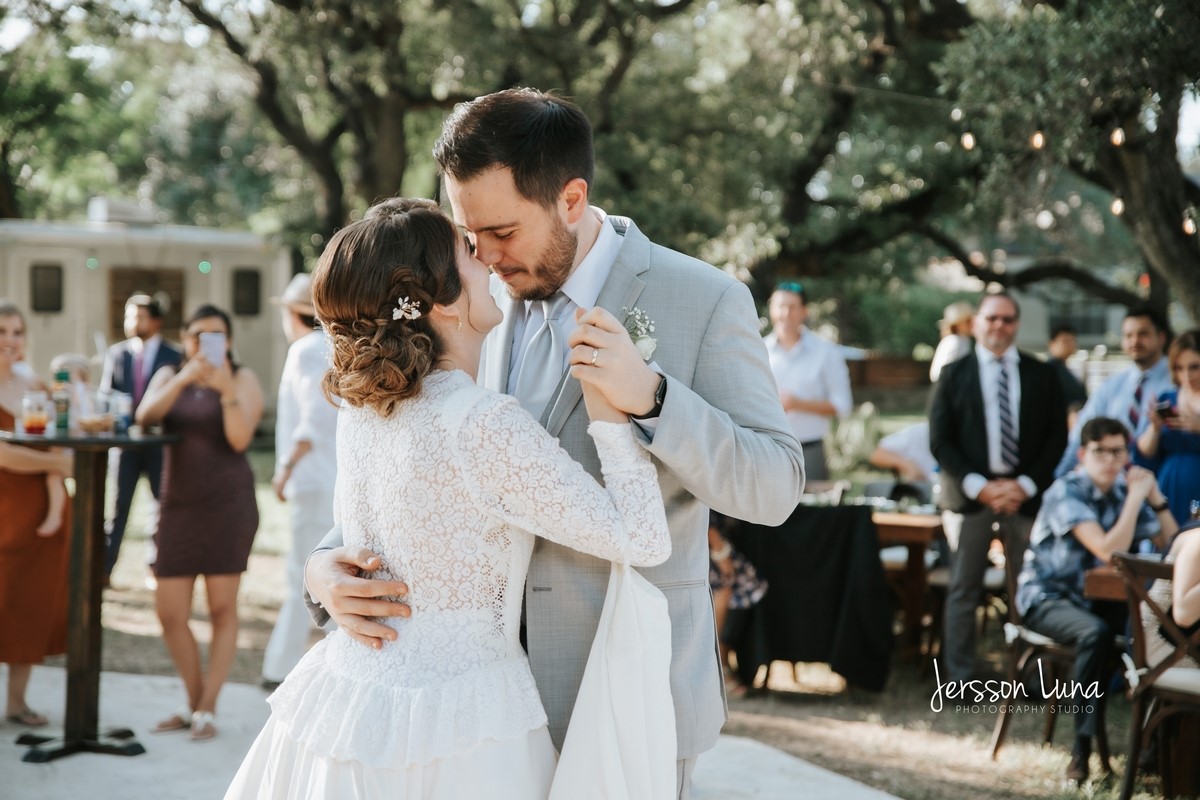 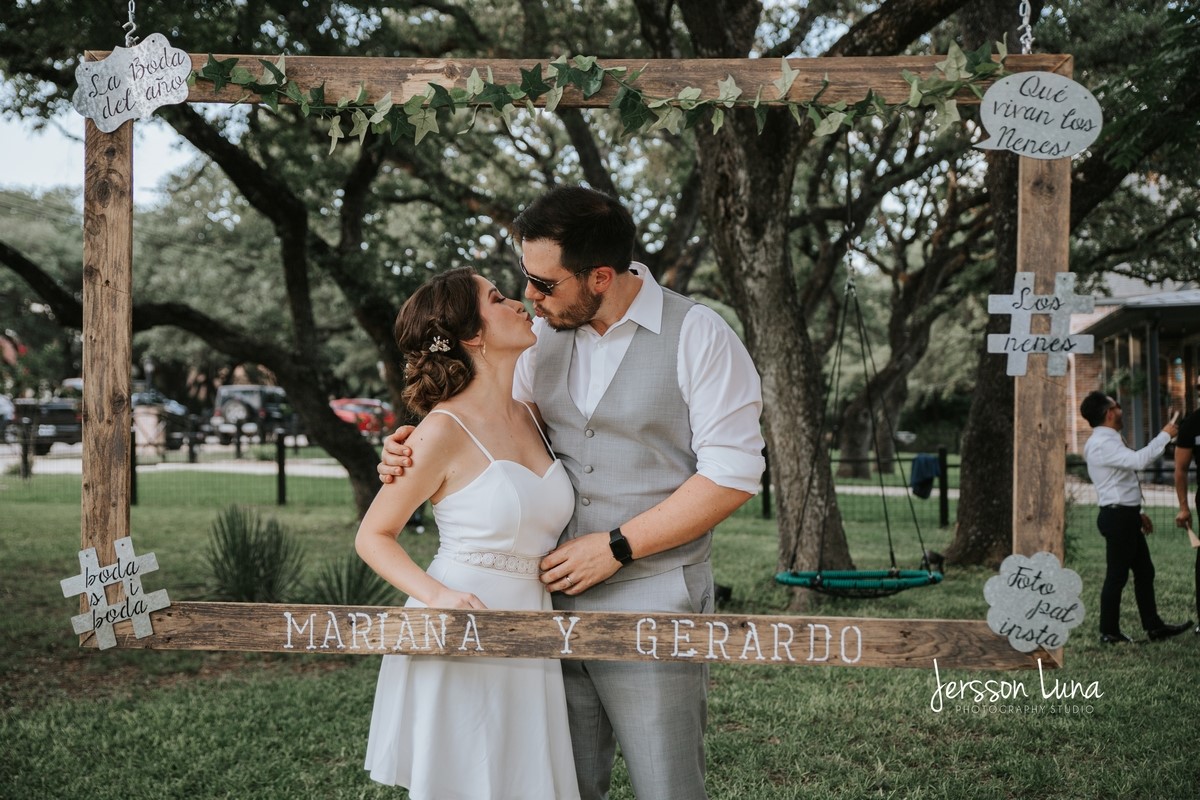 “We put everything together in less than a month,” Mariana said. “We chose the vendors that we did because they are close friends and we believe they are all the best at what they do. Everyone was extremely helpful and made our day a magical moment.”

“Our wedding was magical,” Mariana said. “It was an extremely special moment for us. We planned everything in less than a month and both of our families helped us make it happen. My brother and my sister-in law let us have the party in their front yard which is beautiful and full of trees.”

Both of their families helped them build and decorate absolutely everything. They hired a DJ the night before the wedding, their photographer about a week before,  and their bartender they also met the weekend before the wedding.

“Our talented friend Dario made our beautiful cake,” she said. “Our friend Gilda made our sweets table and the quesadillas we served were delicious. My friend Cesar Ferretiz did my make up and hair, and he made me feel like the most beautiful girl alive on a very special day! Everything came together beautifully and we are beyond thankful to everyone that helped us celebrate and make this a fairytale dream come true.”

One of the most significant moments from their wedding, was the dress Mariana wore.

“I was able to wear my grandmother’s wedding dress which was also worn by mom on her wedding day,” she said. “This was extremely special to me because my grandmother passed away about a week before Gerardo and I got engaged back in 2019. My grandma was my everything. She was and still is one of the most positive influences I have ever had. When it occurred to me that I could wear her dress I knew that it would be the most amazing wedding because I was certain that she would be right there with me.”

“Because it is an almost 80-year-old dress, it had to be treated with extreme caution,” she said. “They helped me remove a few stains that it had, and they even added something extremely special to it.”

The morning of the wedding day when she was putting on the dress, she noticed there was a white heard inside, reading “Siempre Contigo Pelancha.” Meaning “always with you Pelancha.” Pelancha, her grandmother’s name, was stitched with blue letters.

“It was a very special moment and I can’t thank Grace and her team enough for making the dress even more special,” she said. “I felt my grandmother’s presence the whole day, and I knew that she was right there watching us, crying of joy as we took the most important step in our lives so far.”

Another very special fact of their wedding and relationship, back in March of 2019 when Mariana’s grandmother started to get sick and they knew she wouldn’t be around much longer, Gerardo knew how important it was for me that my grandmother be present at our wedding.

“We weren’t engaged yet but he knew he wanted to marry me. and he knew we would be engaged soon,” she said. “He took me to see my grandmother at the nursing home she was staying at in Mexico City, and he planned a small intimate blessing just between us and her so that she could be present since we didn’t know if she would be alive for our big day. I have to say that it was one of the most special days of my life.”

Advice for other Couples

“Enjoy,” Mariana said. “Don’t stress out! I know everyone tells you that the day of your wedding goes by so fast and I didn’t believe it but its true! It was a blink and it was over! So my advice is to enjoy and don’t sweat the little things. Everything comes together at the end and never lose focus of what you the main purpose is…LOVE!”