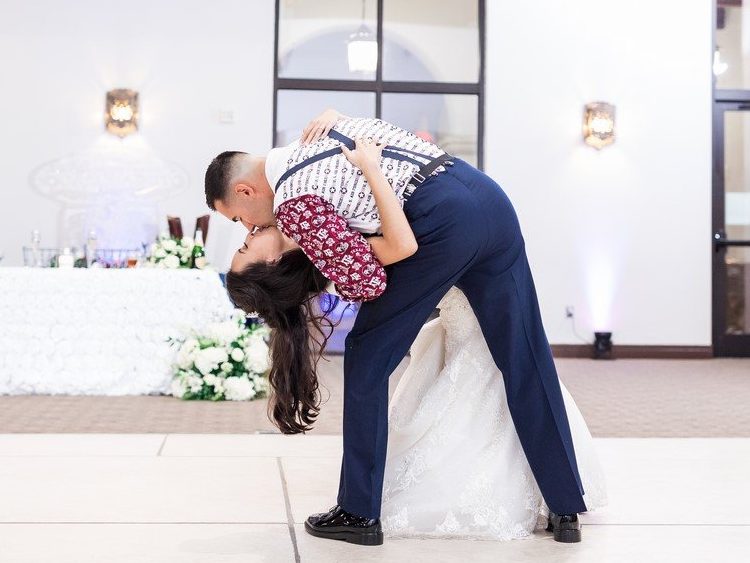 This 12th Man Marries the 1 Woman of His Dreams 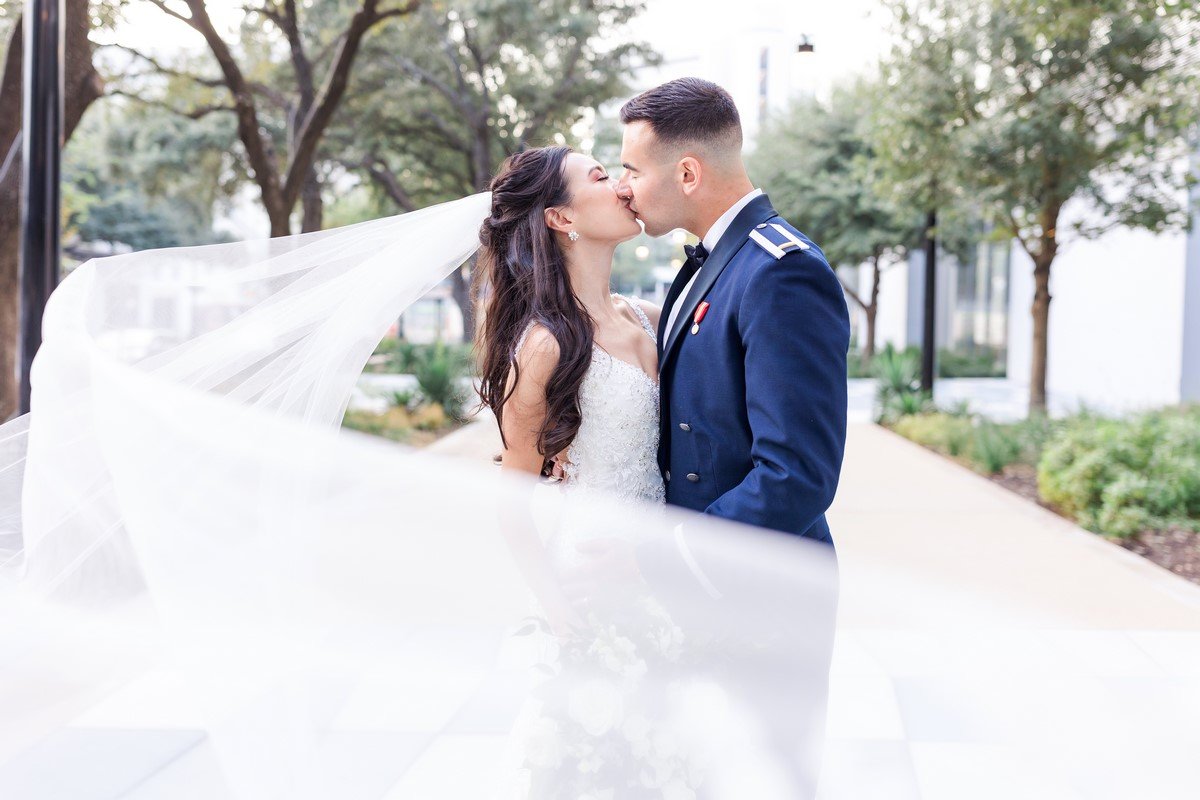 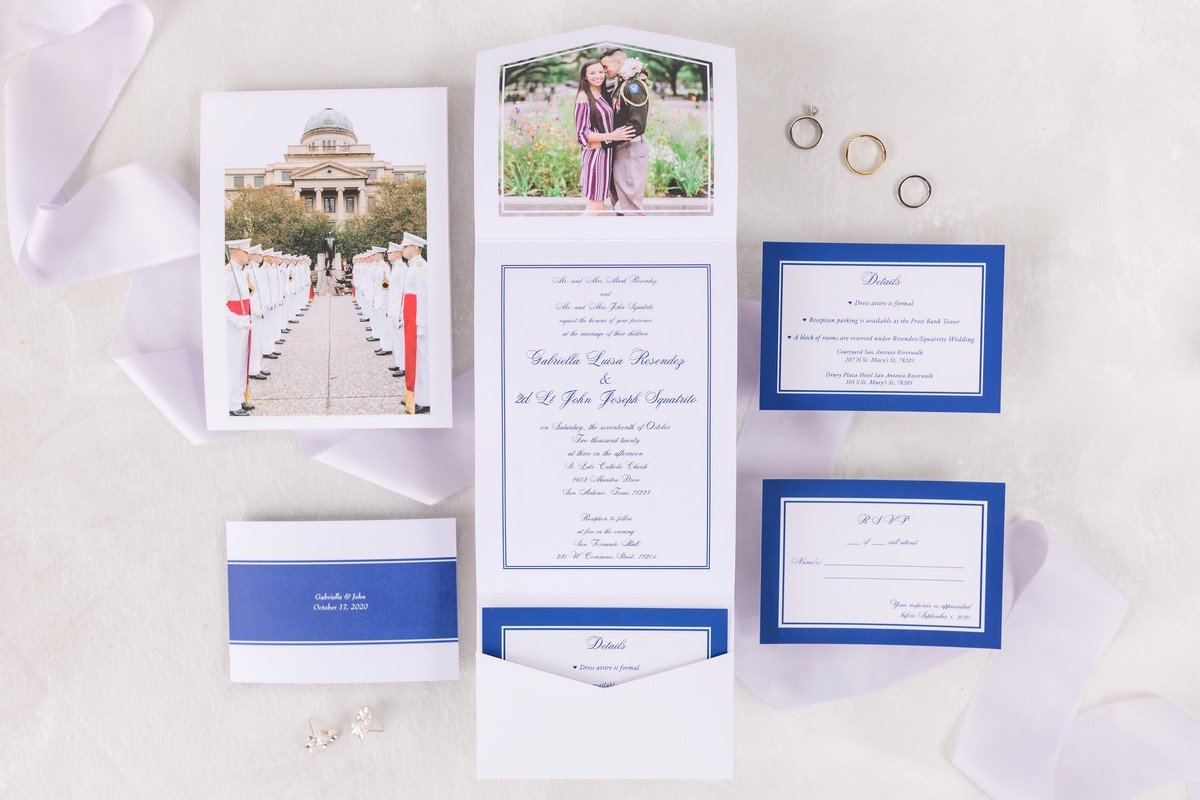 How The Couple Met

John and Bella met taking summer school speech class in 2015 at Northwest Vista College. The first day of class, the professor made each student stand up and said their name and what school they attended and they both said Texas A&M University (WHOOP!). When John and Bella returned to Texas A&M for the fall semester, they had lunch at the Memorial Student Center and John asked Bella to midnight yell practice. The rest is Fightin’ Texas Aggie history!

As a member of the Ross Volunteer Company (RV’s – The Honor Guard for the Governor of Texas), John asked 20 RV buddies individually to perform a saber arch (the highest honor in the state of Texas) for his proposal to Bella. John had told Bella that he hired a student photographer to take family photos on campus since it would be his last time wearing his senior boots as a member of the Corps of Cadets. Turns out they were taking more than just family photos!

It had been raining all day long, but the weather cleared up just in time for the “family photos.” Joshua Sweet, John’s best man, met Bella and her family and grandparents in the Memorial Student Center and informed them that John and his family were at Academic Plaza and that he was tagging along to take photos alongside the photographer that John hired.

As Bella, her family, and Josh made their way to Academic Plaza carrying umbrellas prepared for more rain, there came a point where Josh turned to Bella and asked to escort her. Bella looked at Josh and said “What? We’re just taking family photos!” and proceeded to look at her parents whose eyes had become teary and faces became lit with smiles. (John had already asked Bella’s father for her hand in marriage). Josh escorted Bella to John down military walk where John got down on one knee and proposed to Bella and she said YES!

Although this was not a typical Aggie Century Tree proposal location, it was extra special because it was the same spot Bella’s dad proposed to her mom. Reveille (the mascot of Texas A&M) even made an appearance! 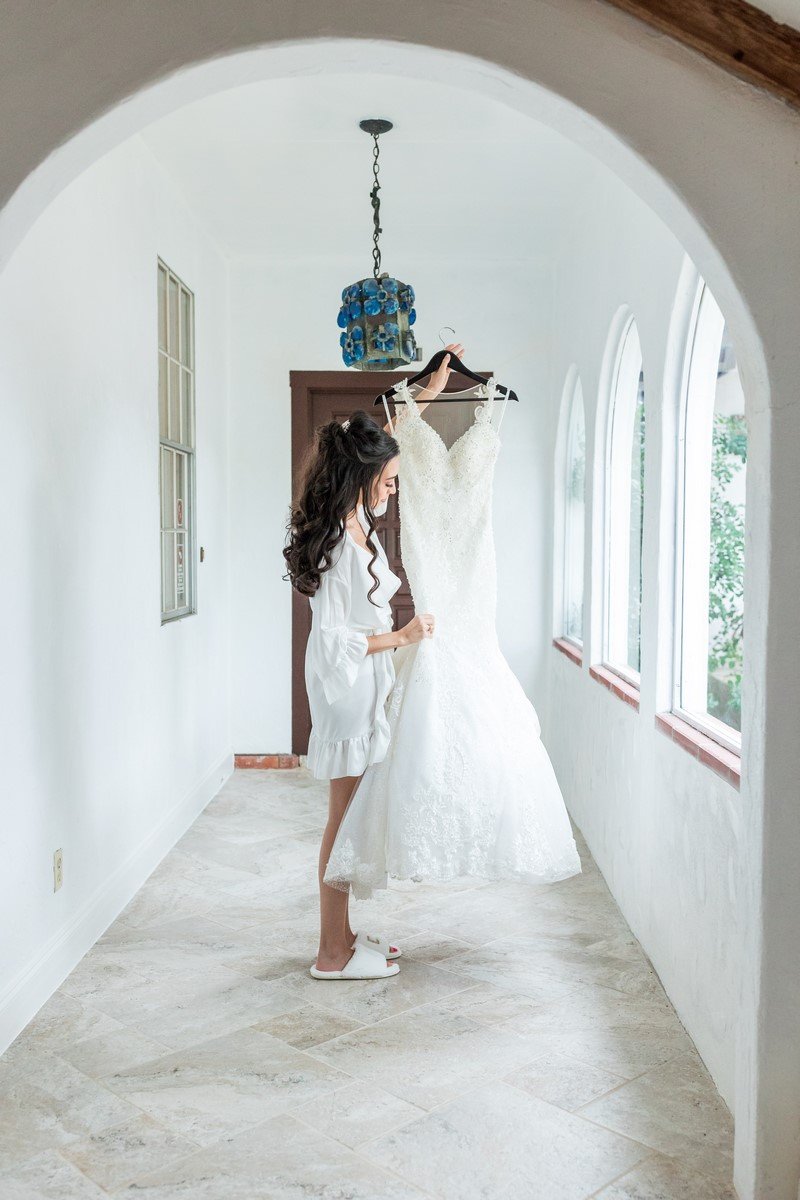 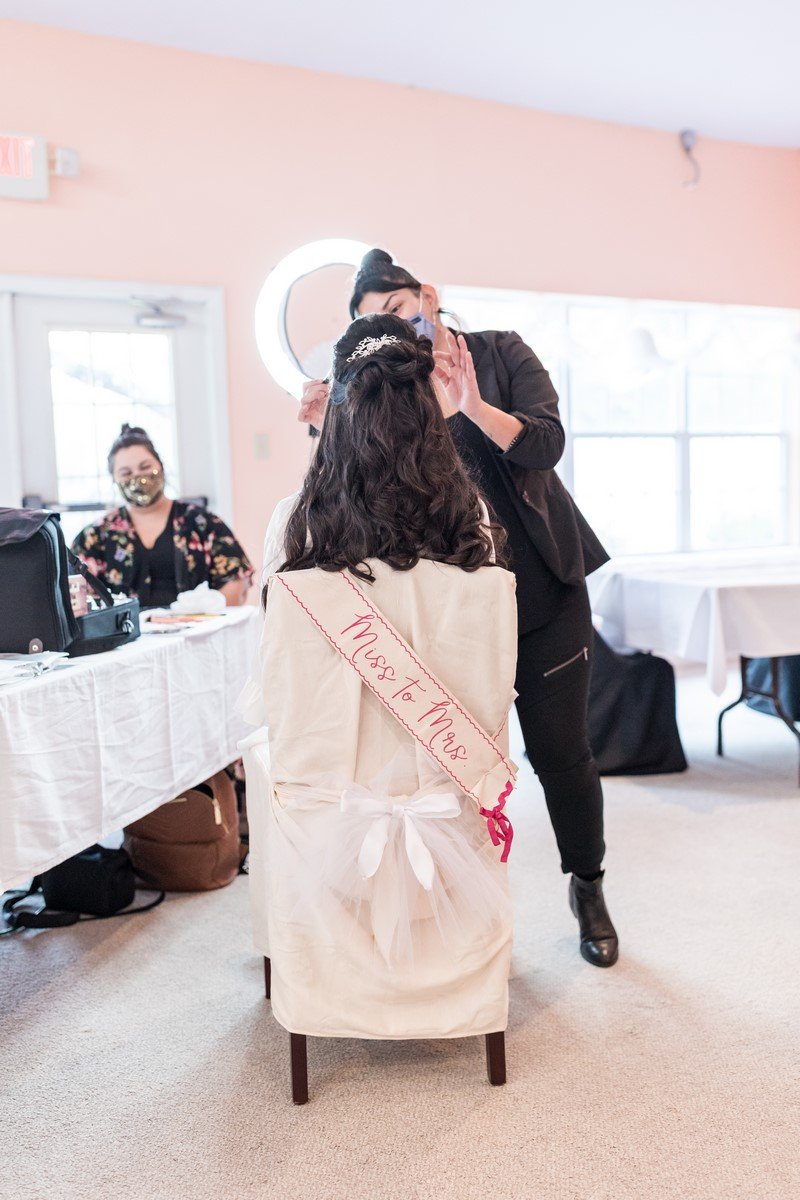 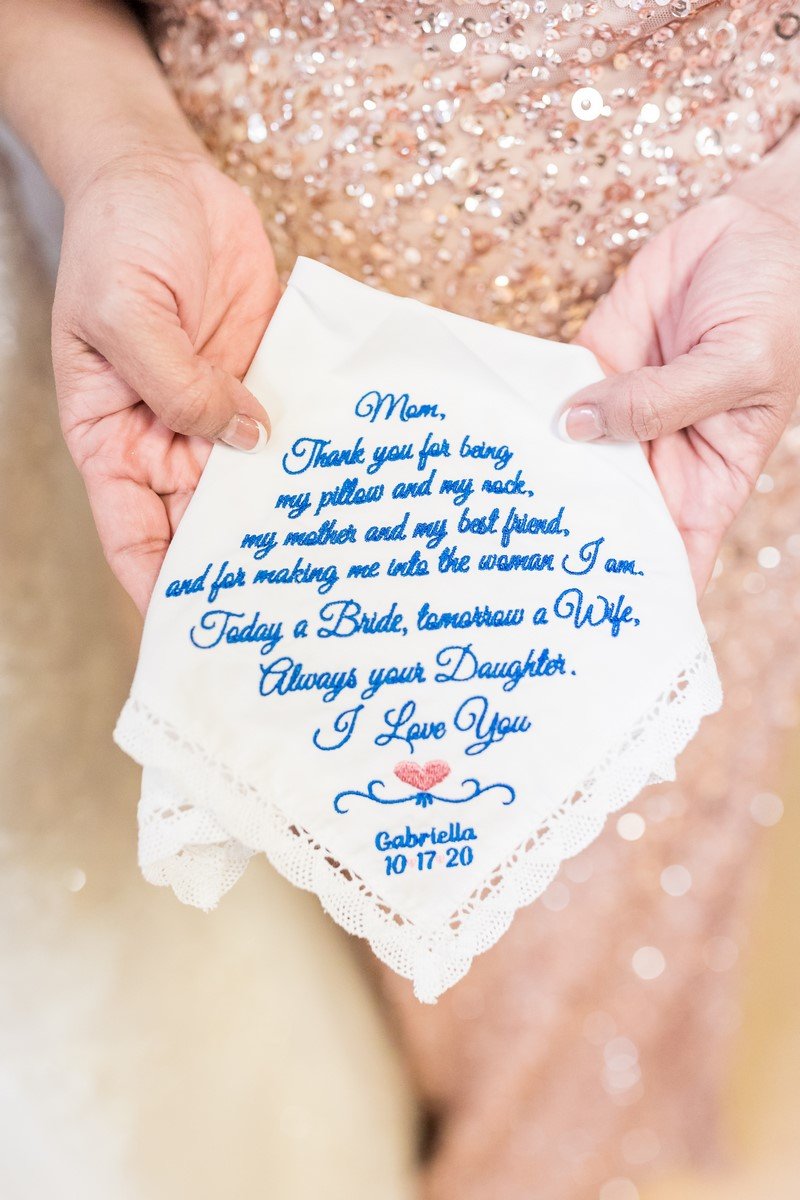 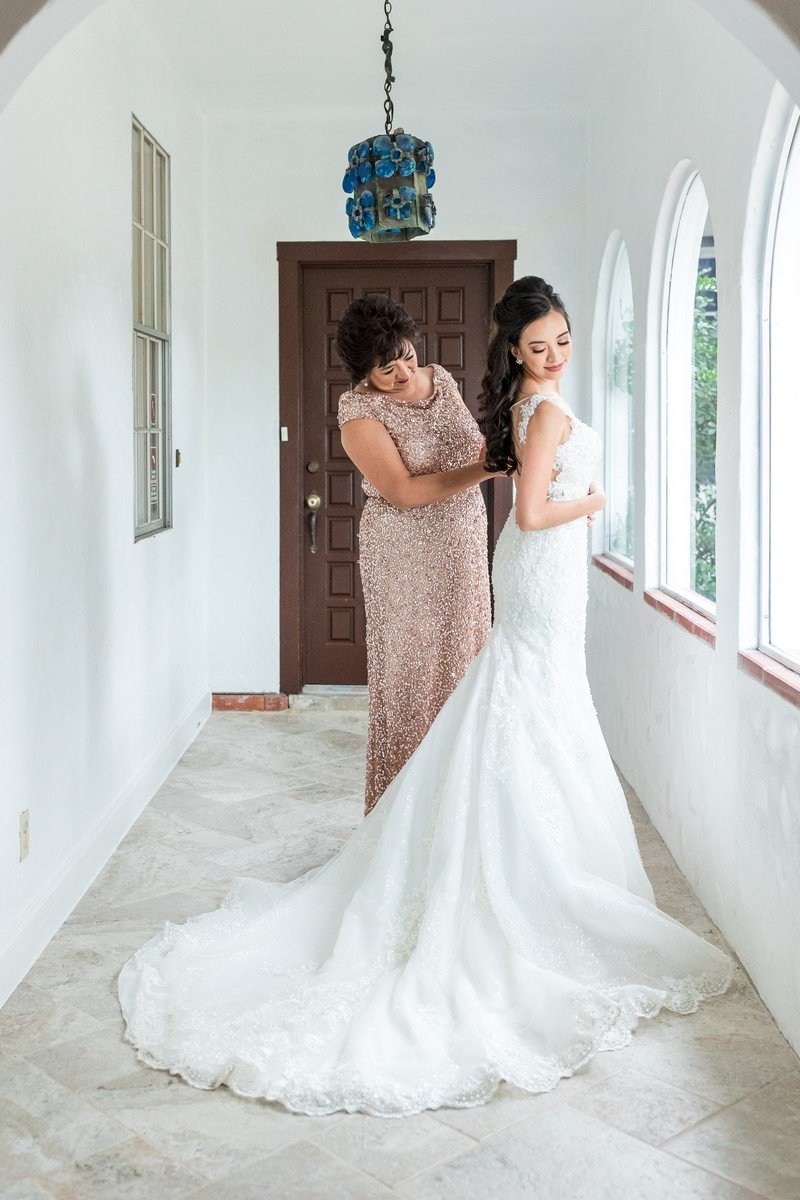 Given that John is currently serving our country as a member of the United States Air Force and that the wedding was taking place in the fall, the wedding colors were navy blue, mixes of purple, and silver. John wore his USAF military mess dress, bridesmaids wore long navy blue dresses, groomsmen wore navy blue tux’s, and Bella kept her wedding dress a secret (only her mom knew) for over a year and a half until October 17th, 2020. Bella’s Tia Anna Montez hand-made her bridesmaids matching masks to wear with silver and pearl bling and Bella’s mask was special made using pieces of her mom’s wedding dress!

Maroon runs deep into Bella and John’s families, so naturally there was a Fightin’ Texas Aggie theme as well! John’s groom’s cake was an Aggie ring crest with his class year and the first pieces of each cake were cut with his Texas A&M Corps of Cadets saber. Bella wore maroon Texas A&M heels and behind John and Bella’s sweetheart table was an ice sculpture with an Aggie T-Star logo. The Aggie war hymn was played as the final song and was led by John’s Aggie friend, a former yell leader. John and Bella’s guests waved 12th man towels for their grand exit to a horse carriage ride through downtown San Antonio. After-all, love and marriage go together like a horse and a carriage! 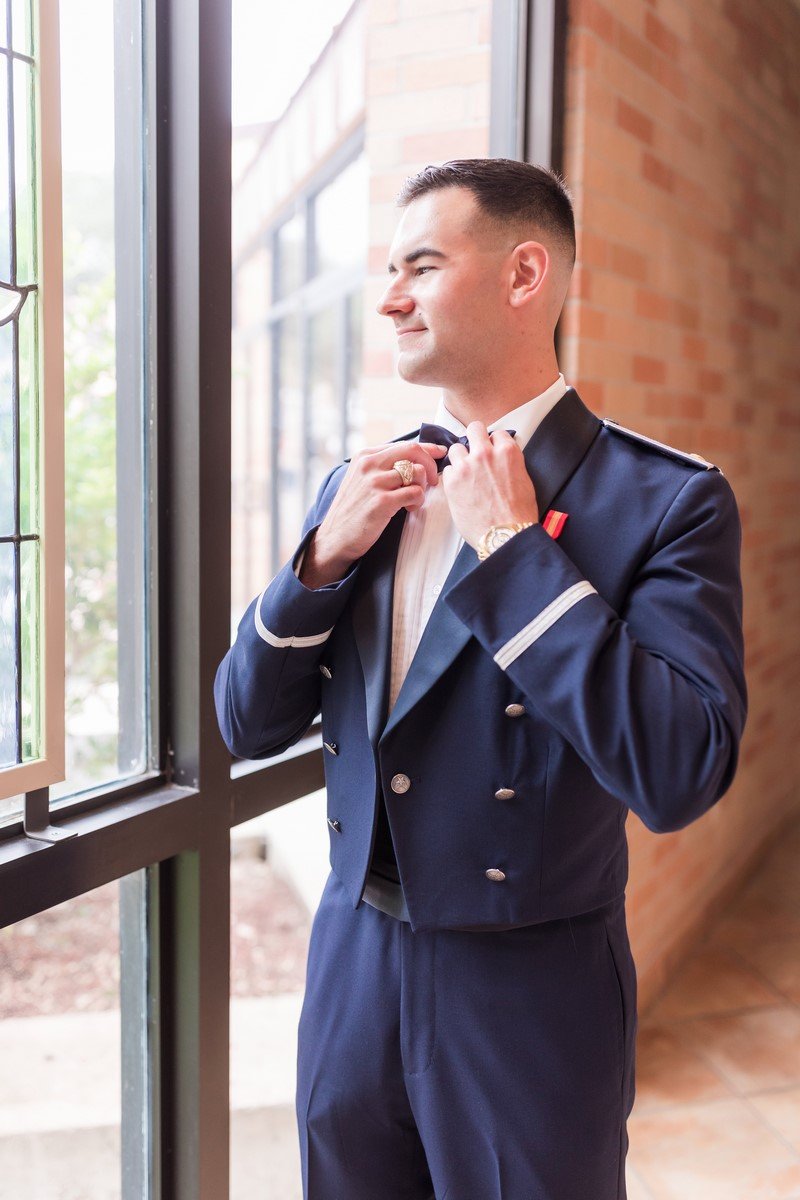 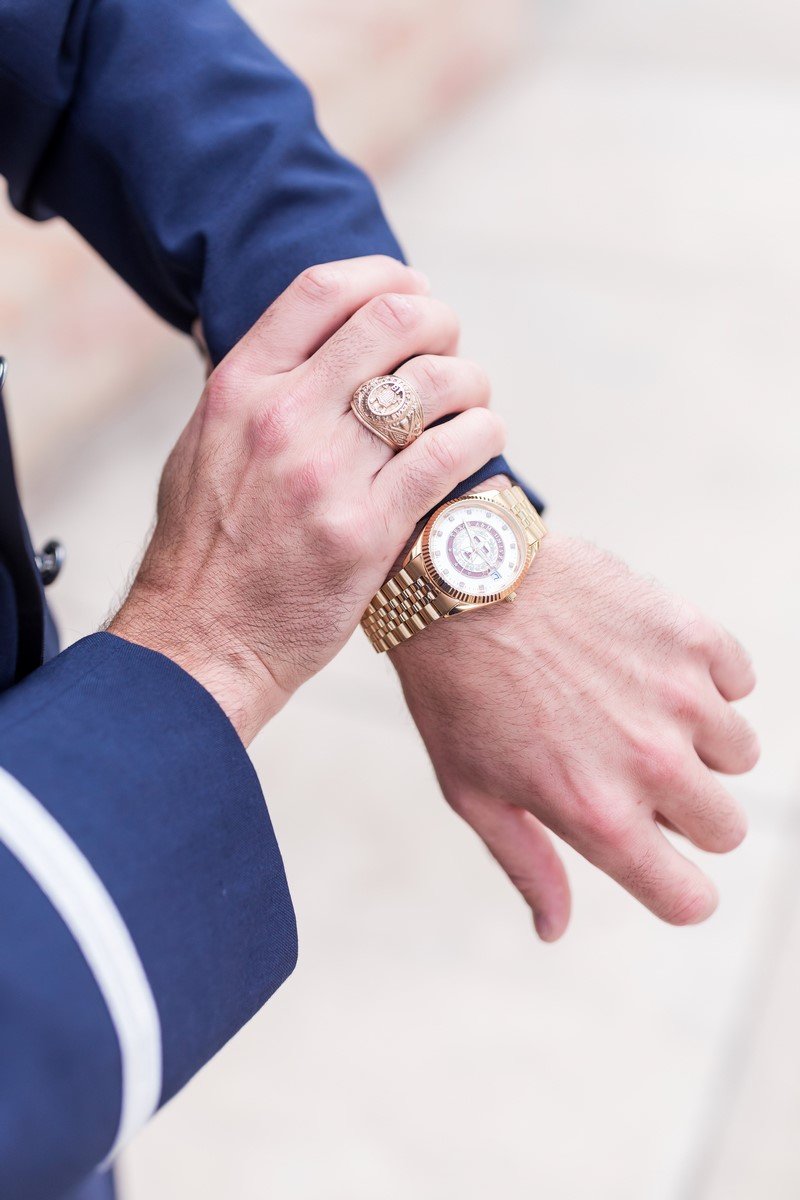 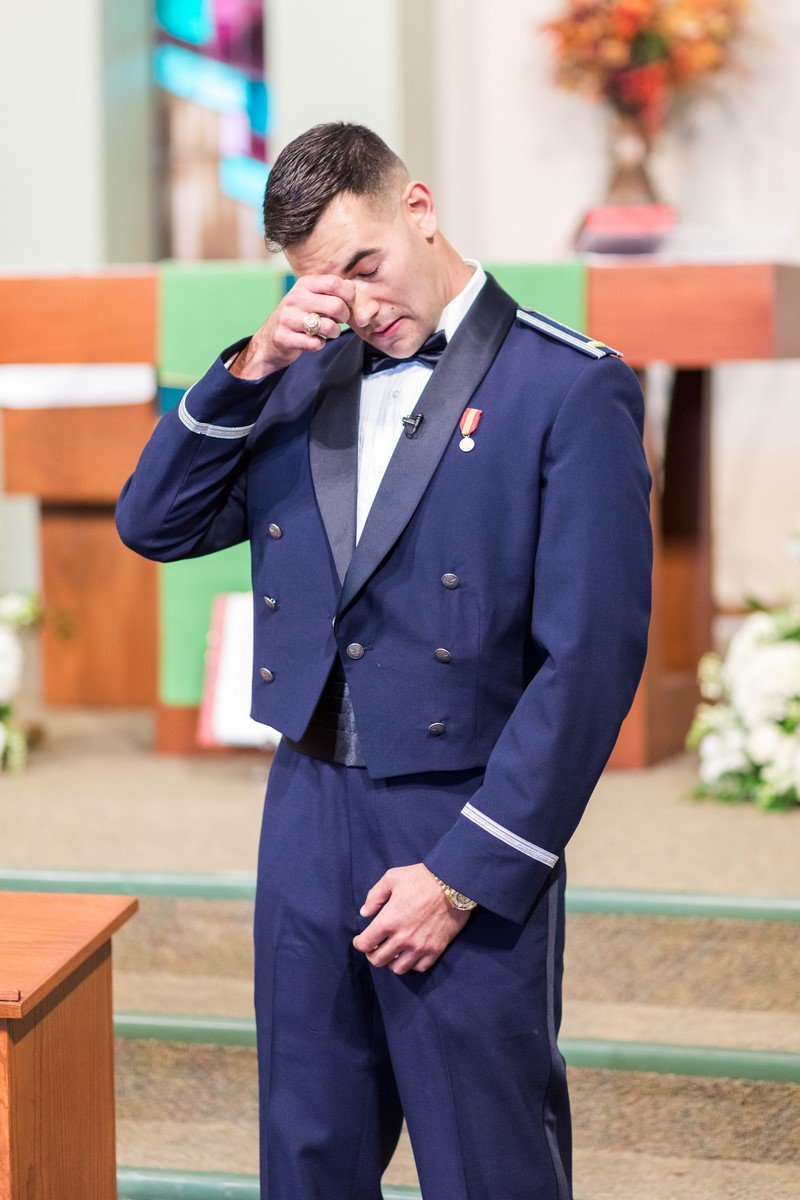 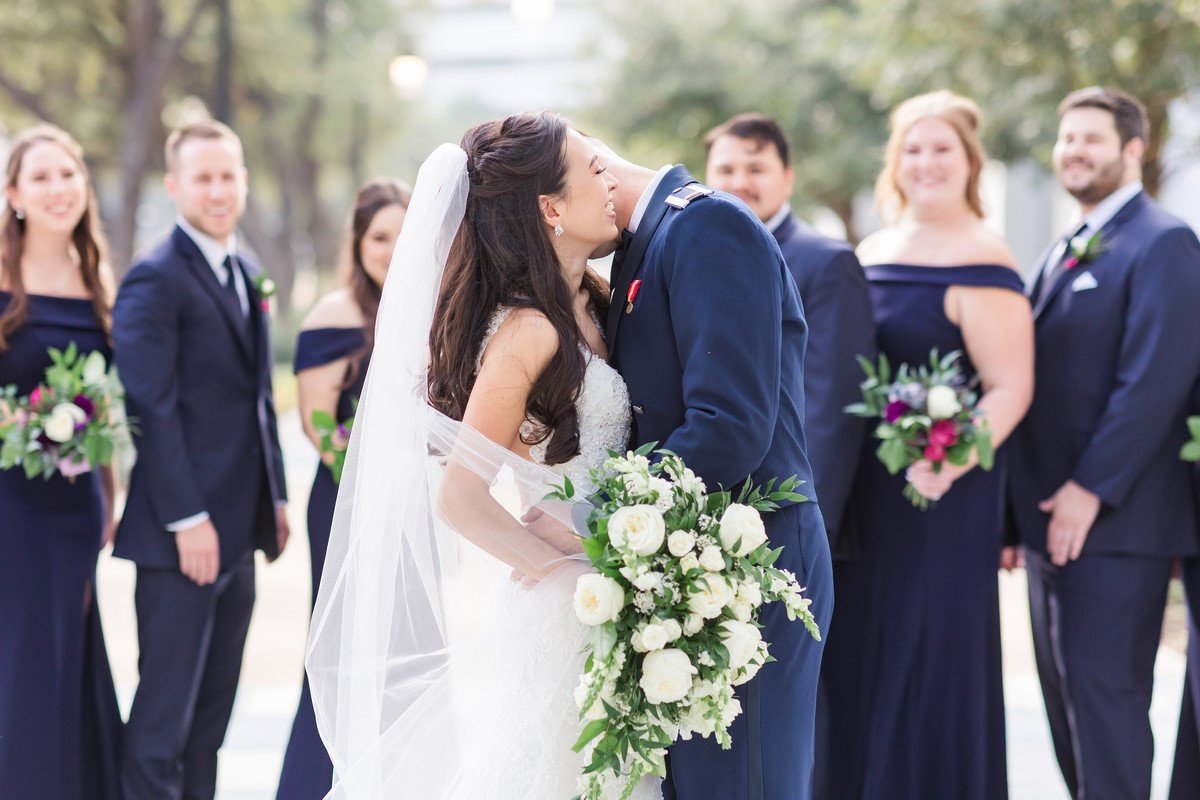 How They Chose Their Vendors

John and Bella wanted to highlight San Antonio’s rich culture and history and selected an INCREDIBLE group of vendors after attending a San Antonio Wedding Fair at the JW Marriott. They wanted a team of vendors that were fun and easy to work with and worked well with one another. John and Bella were married at St. Luke’s Catholic Church, the school that Bella had attended from daycare – 8th grade with a reception downtown at San Fernando Hall. Mariachi Los Galleros de San Antonio were the musicians for both the wedding ceremony and part of the reception, this was the same group that had performed at Bella’s quinceanera. A live local band, Finding Friday, was crucial for keeping the dance floor filled!

A Word of Advice From the Newly Weds

The best advice we can give for couples planning a San Antonio wedding is to check out a wedding fair. Trust us, it’s worth your time! It can seem overwhelming and feel like information overload, but it is essential to be equipped with the best information to select wedding vendors to help you capture and celebrate your wedding day! Attending a San Antonio wedding fair is a fabulous way to meet vendors in person to see if they are a good fit for you and you can even receive some great booking discounts just by attending to simply receive information.

Enjoy every moment and have fun with the wedding planning process, but the most important thing to remember is that you are getting married to the love of your life! 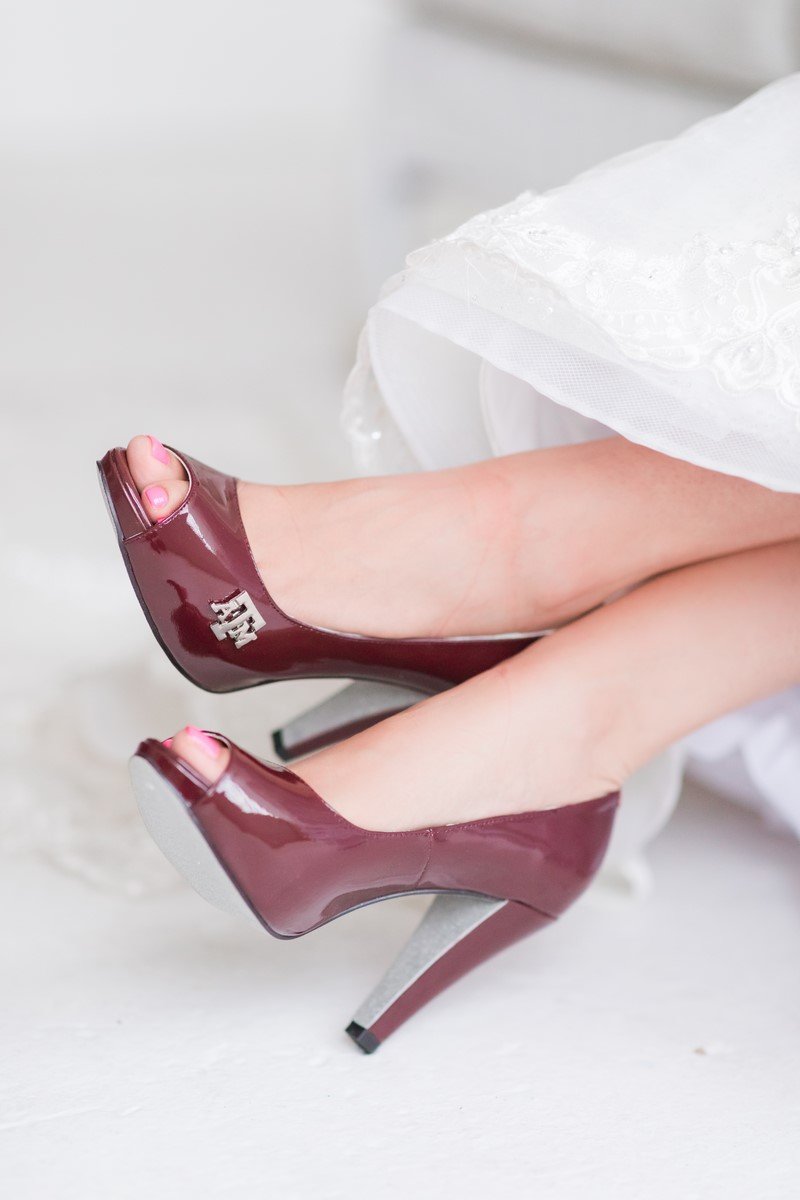 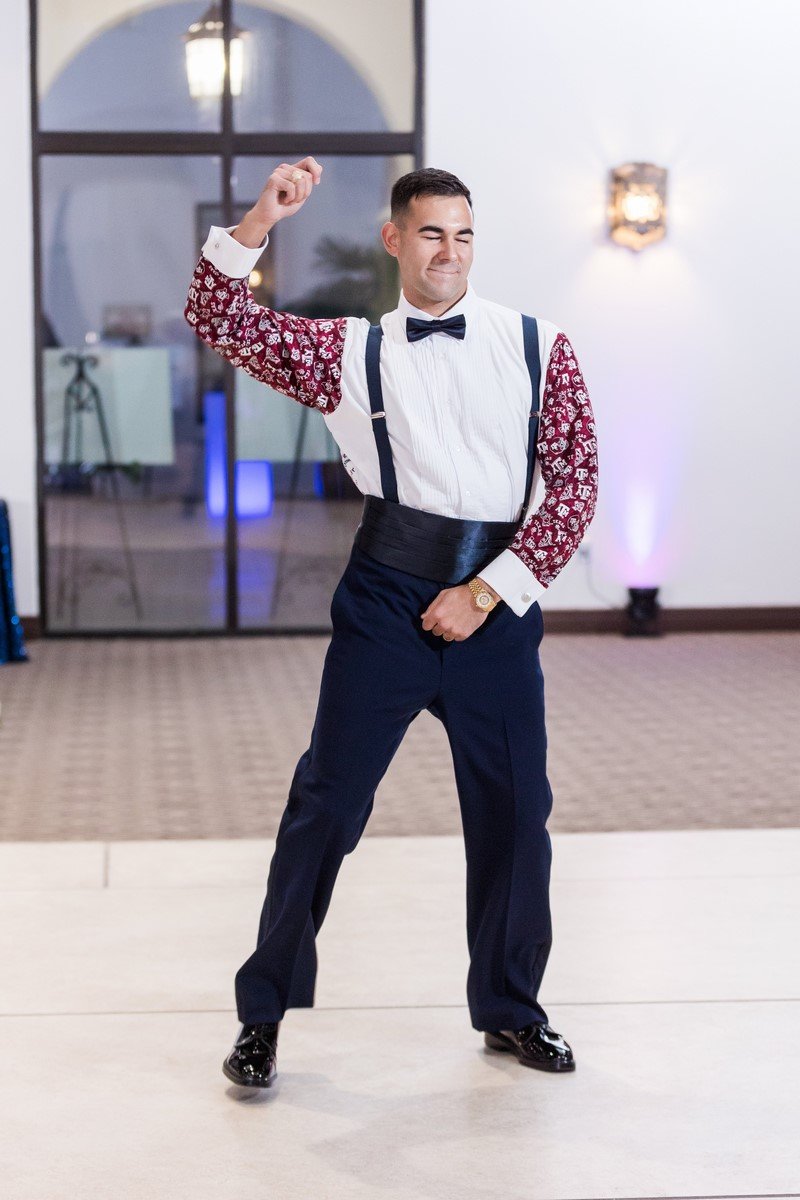 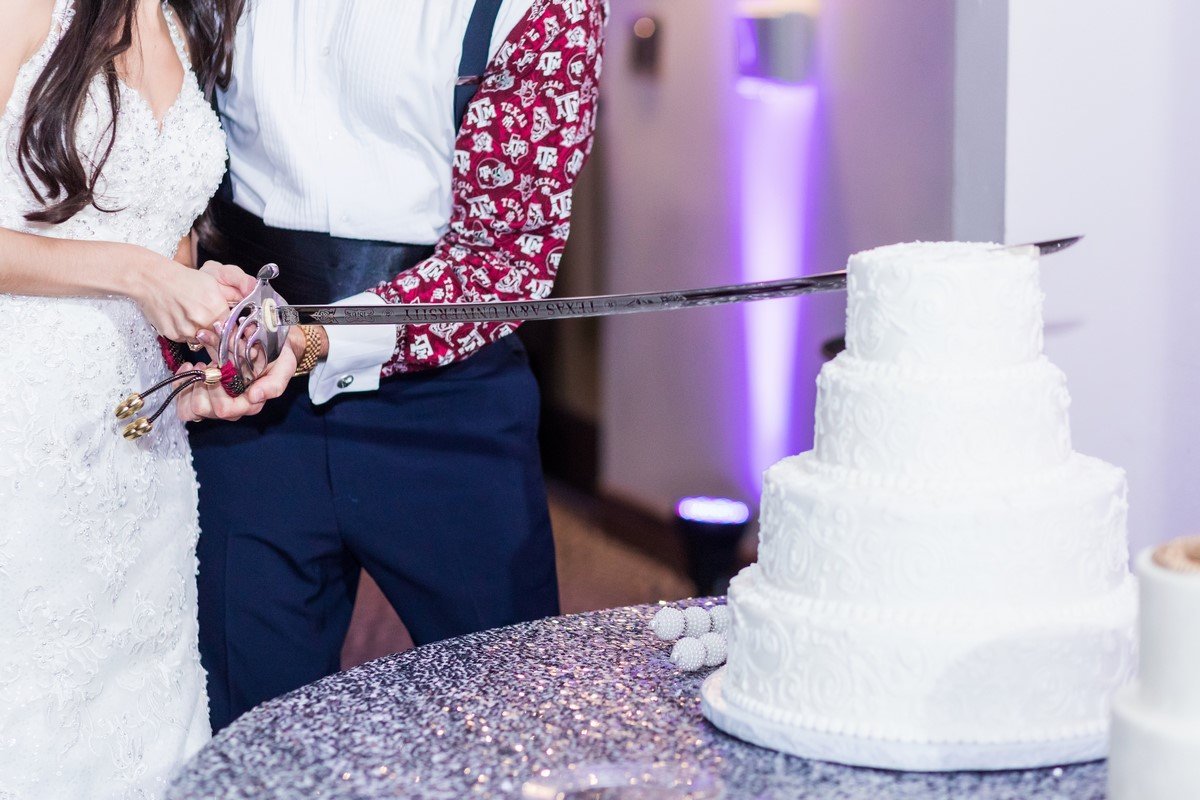 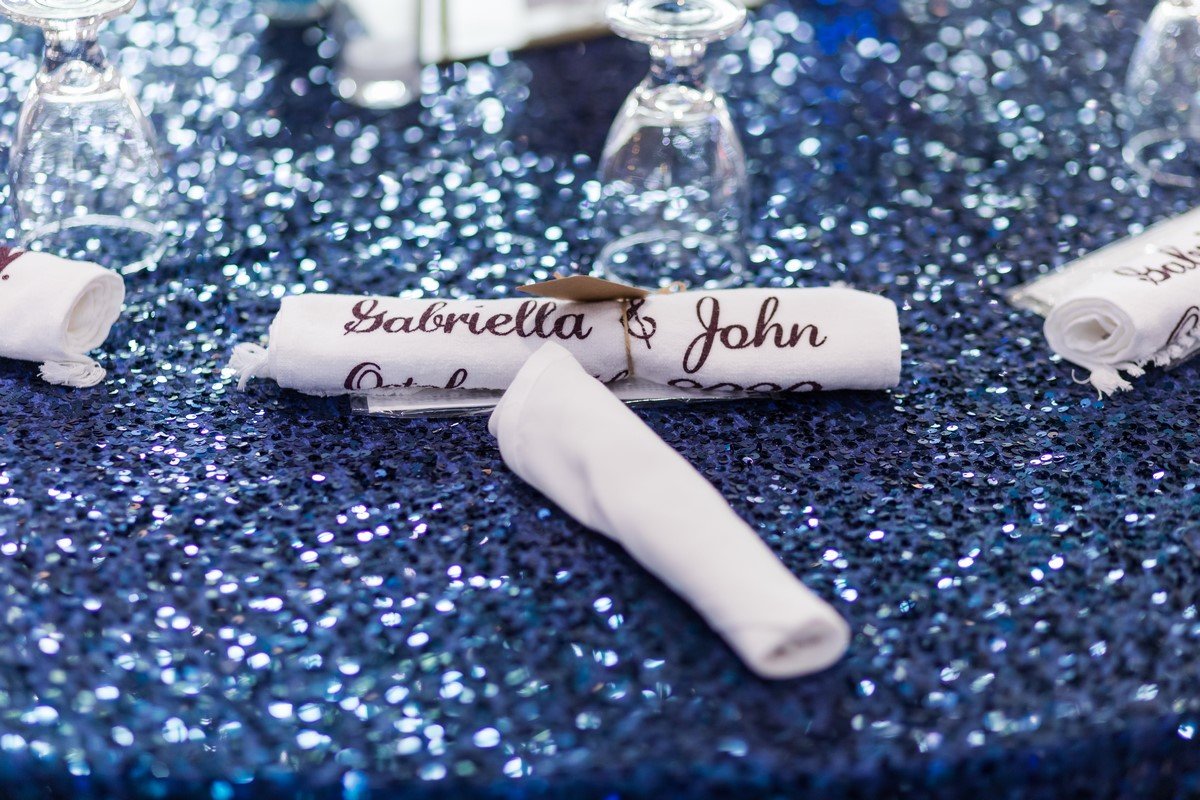