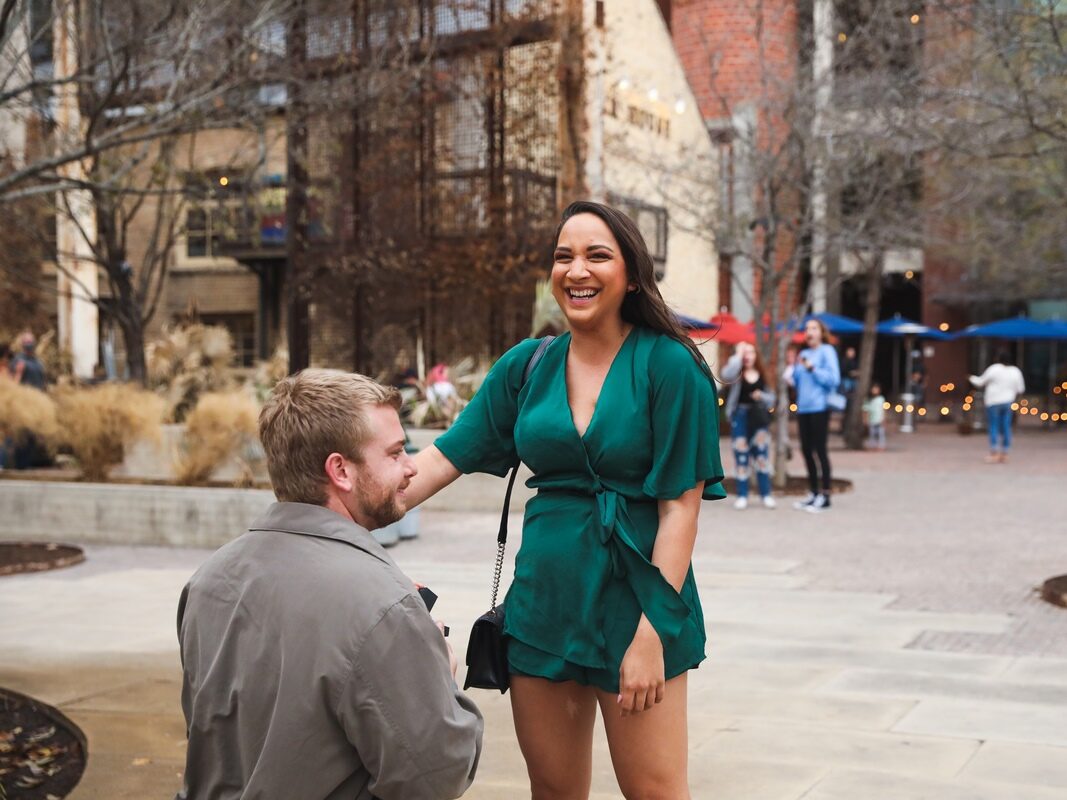 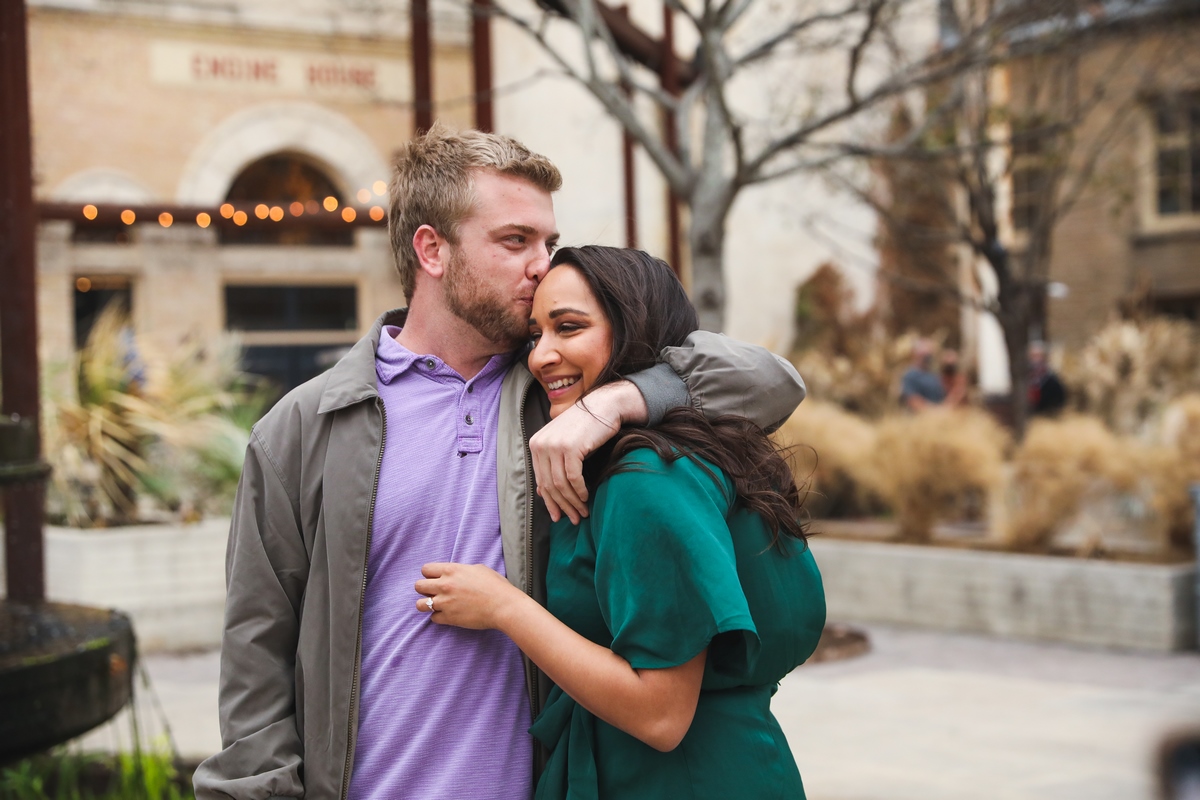 We both moved into the same the apartment complex in 2017 (shout out Ridgeline at Roger’s Ranch!). The complex always threw community events every month. Around Christmas time, they put together a Christmas mixer for the residents. I (Rebecca) went to the “Jingle Mixer” with my co-worker who also lived at the complex. Garrett had just come back from happy hour with a friend and realized he didn’t have any food to eat at his apartment, so he decided to join the “mixer” to scavenge through whatever food was left over. When Garrett walked in, he recognized my coworker as a mutual friend, and ended up joining our little “jingle mixer” group. We chatted for a bit and even ended up taking the party to the fire pits for a s’mores and “champagne bongs” night cap.

We ended up hanging out increasingly as the year went on. From summer days/nights at the pool to Randy Rogers and Wade Bowen concerts at Floores, we continued to hang out because of our easy-going friendship and effortless chemistry. Garrett even invited me to be his “date” at a child’s third birthday party so he could convince his co-workers i was real. I even invited myself over to his house every Monday/Tuesday to watch Bachelorette / Bachelor in Paradise because I did not have cable. Funny fact, the first episode of the “Bachelorette” we watched together was the season finale of Becca Kaufman’s season where she ends up picking a guys named Garrett for her final rose. A little over a year after that Christmas party, Garrett and I finally decided to make it official and he’s been getting my last rose ever since. 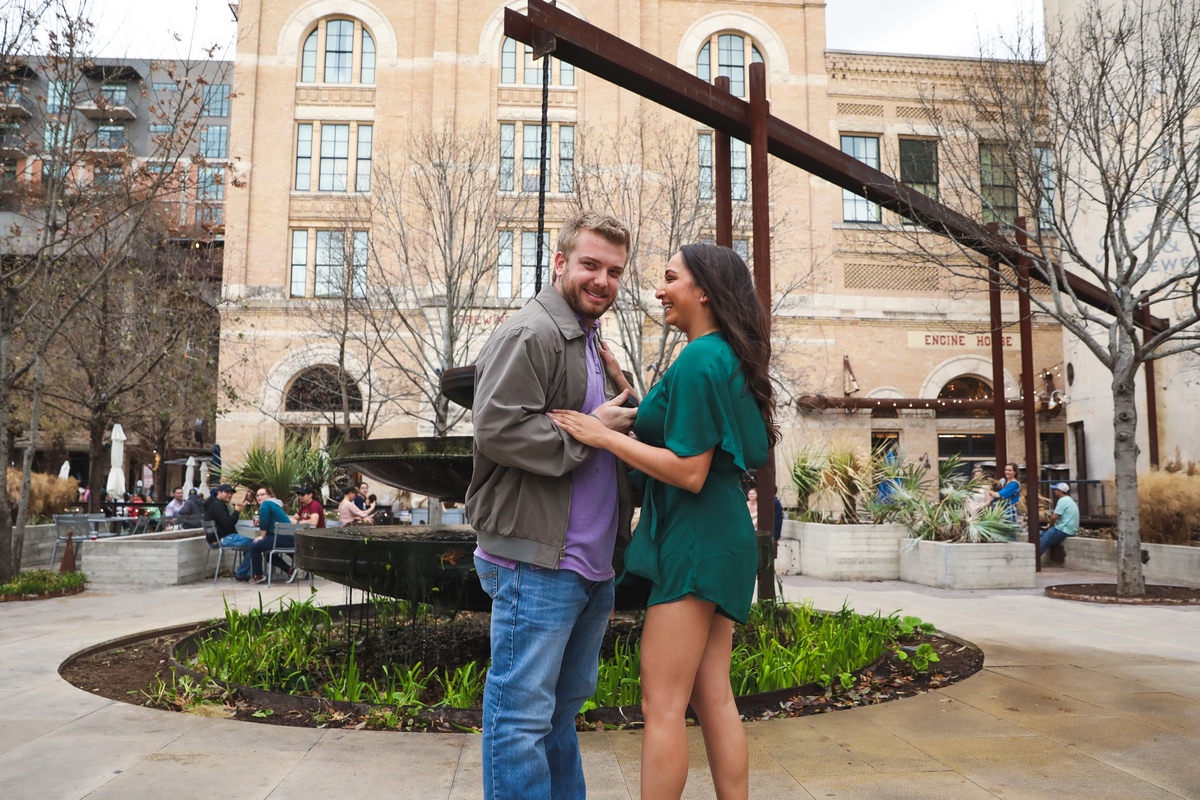 Garrett says I had been “bugging” him since mid 2020 about when he was going to propose. I may have had a continuing tracker posted in our house of how many days I had gone without an engagement ring, oops. Fast forward to March 2021, we decided to go to Best Quality Daughter at the Pearl to celebrate my upcoming birthday. Before dinner, Garrett took me to drinks at Hotel Emma. After Emma, we were walking to dinner when Garrett stops in front of the fountain at Southerleigh and says “Wouldn’t today have been a good day for me to propose”, a running joke he has said since who knows when. I said “ha, it would have been.” He then says “Well good thing I’m doing it now.”

He drops to one knee revealing the most gorgeous ring as I’m screaming “SHUT UP! NO WAY!”. Both of our families were there to watch the proposal and my brother-in-law captured the entire thing.

Side note: I (Rebecca) had originally made the reservations for Best Quality Daughter for 2 people. That Tuesday before, I received an email saying the reservation was changed to 8. Before i could call the restaurant to say they made a mistake, I realized Garrett may be proposing. The entire week I was tossing back and forth the idea of a proposal or that Garrett was just throwing me a surprise birthday dinner. The day of the proposal, Garrett made us do our Spring Cleaning and was originally going to wear an athletic t-shirt and jeans to dinner. I knew at that moment he wasn’t proposing because who would wear such a thing to their proposal.

Luckily, Garrett knows me better than myself and put on that outfit to throw me off…and it worked! The entire drive to the Pearl, I was talking myself out of it saying it would still be a good night even if there was no proposal. Also, thank God he changed out of that athletic shirt into a nice polo. 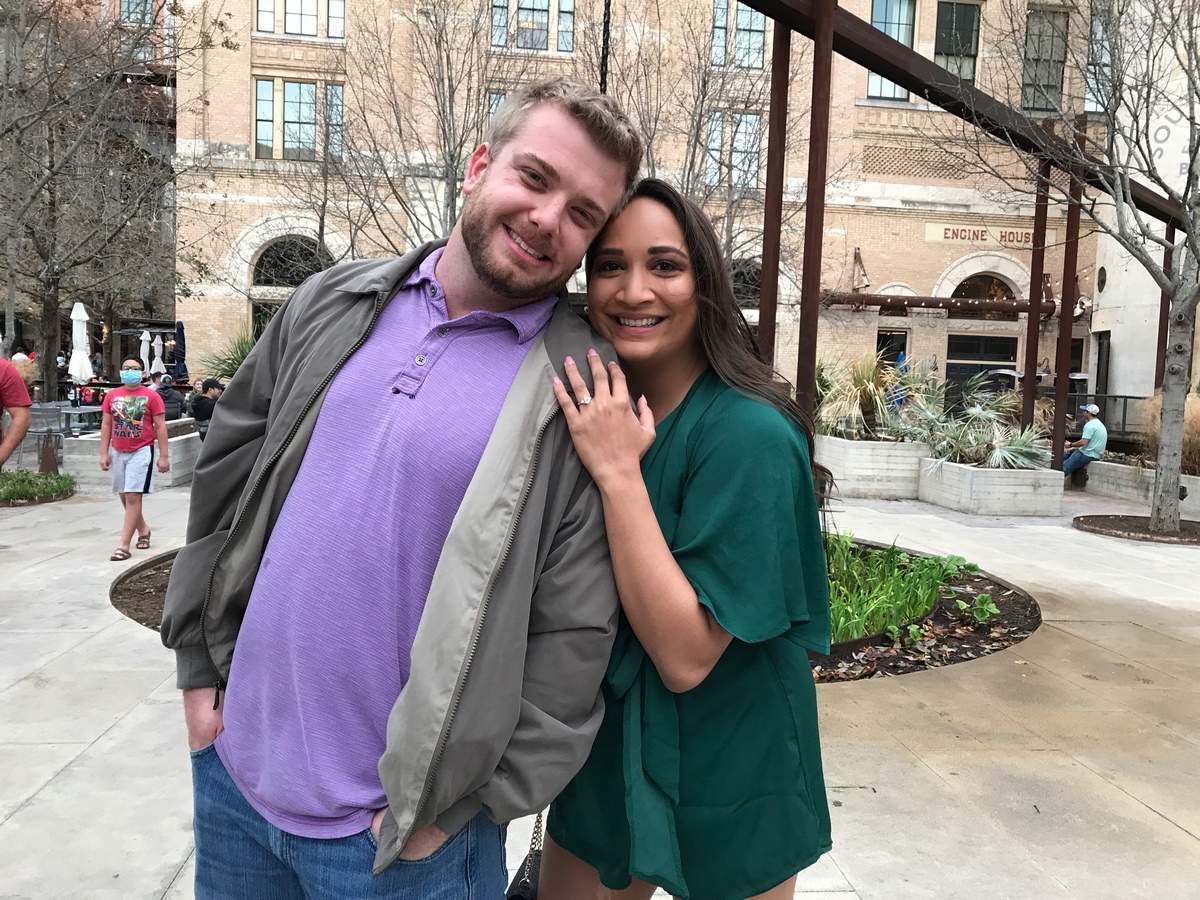 Details about the Ring

Mr. Medrano, the jeweler/owner of Gold Tender, is one of Garrett’s best friends father. We always knew we wanted him to create our ring and he was so gracious during this process for us. I (Rebecca) always had an idea of what I wanted and knew it had to be two things: 1. Rose Gold Band and 2. unique.

Garrett and I scavenged through Pinterest and put together our perfect ring. Garrett took the reigns and ensured all of my demands were met. Garrett enjoyed the process of working with Mr. Medrano because of his years as a prominent custom jewelry designer. He even has created/designed Garrett’s mom’s wedding ring and Garrett’s best man’s wife’s engagement ring. The ring came out better than expected and we are grateful for the continued care my ring will receive from Gold Tender.